A greeting from Borghamn. The picture postcard shows the "guesthouse" of Borghamns Touristhotel, date unknown.

From 1842 to 1894 Borghamn was a "work station of the crown" under the direction of the "Kronoarbetskåren", i.e. the crown's work corps. During this period, much of the building work that still dates back to the founding years of Göta Kanalgesellschaft was modernised, and in 1879/1880 this "new" barracks was the last new building to be constructed.

After the prison was closed, Borghamns Turisthotell, also known as the "Ombergspensionatet", was established in the former officers' mess. The guest rooms, on the other hand, were set up on the upper floors of the "new" barracks" at the harbour. The picture shows the original form of the building, in which arrest cells on the ground floor and the first floor are recognizable. In later years the southern part of the building was rebuilt. On the upper floor, accomodation rooms were created instead of the prison cells, while the heating room was installed on the ground floor.

Even today, a remaining arrest window on the southwest side reminds us of the former purpose of the building.

Aerial view of Borghamn, before 1961

A greeting from Borghamn. The postcard shows old Borghamn from the air and was taken before 1961.

The Vadstena Folkhögskola Association founded the country housekeeping school in 1923 on the former premises of Kronoarbetskåren. The barracks became classrooms, and the large annex was turned into a sewing and weaving room. On the upper floor of the barracks a teacher's flat and later a headmaster's flat were created. The students were housed in the former commander's house and other buildings.

In 1972 the housekeeping school was renamed Borghamnskola, ten years later the boarding school was taken over by the municipality of Vadstena. In 1992 the focus of the school shifted to the children's and leisure programme. Five years later the school moved to Vadstena (Vadstena Gymnasiet). From 1997 to 2017 a youth hostel was operated on the premises. Today the complex belongs to Borghamn Strand.

The picture shows old Borghamn from the air, long before the great changes of 1972, when Norra Sjövägen was given a direct connection to Borghamnsvägen through the filled quarry. The extension of the quarry to the east is clearly visible. In the picture the entrance to the harbour starts at the chestnut alley and leads from there directly to the "Kommendanten".

The house with the gymnastics hall ("Leutnant") had not yet been built. However, the old quarry from 1842, which is partly still preserved today, is clearly visible.

The fishing boats are neatly lined up next to each other. At that time there was hardly any trace of leisure boats.

View from Bårstad's lime kiln before 1960

The picture postcard shows the view from Bårstad's lime kiln and was taken before 1960.

The lime kiln at Bårstad's limestone quarry was put into operation in 1908, after the predecessor on Hovanäset had been shut down. It was in operation until 1960 and was blown up around 1970. A small hill by the tennis court opposite the water-filled quarry is a reminder of it.

The picture shows Hovanäsvägen in the foreground, i.e. the way from the railway station in Borghamn to Hovanäsudden, and the "fishing village" behind towards the shore of Lake Vättern.

The settlement here in the Bårstad's part of Borghamn developed from the beginning of the 19th century and had the fishing as economic background. In 1940 there were 28 families who earned their living from fishing. The inhabitants of the lakeside estates had their own small harbours and bridges, which still exist.

Take a guided tour from Västerlösa to Hovanäset and discover the unknown eastern part of Borghamn. Read more on Kulturguidningar i Dals guided tour programme.

A greeting from Broghamn. The postcard shows Bårstad's limestone quarry kalkstenbrott and was taken around 1910.

The limestone quarry in Bårstad started operations around 1860 and supplied the Hovanäset site business, which had been founded by Hagelin from Mjölby, farm owner in Bårstad. These included the distillery, mill and lime kiln, stonemasonry and dairy at the barn on Trädgårdsudden, as well as their own boat harbour. Limestone was transported to the headland on its own industrial track (3 foot gauge). Remains of earlier activities can still be seen there (see Östgöta Dals hembygdsgård).

This was an entrepreneurial company. For example, they produced "Puderette", a mixture of fertiliser, peat and lime, i.e. a predecessor of today's flower and plant soil.

The limestone quarry and lime kiln were in operation there until 1961, when the company ceased operations. The demand for lime had decreased. And the quality of Bårstad's limestone was not as good as that of Borghamns limestone quarry. The lime kiln was blown up in 1972. A small hill at the tennis court still reminds of him.

Today the limestone quarry in Bårstad is filled with water. It was used for fish farming for several years.

Take part in a guided tour on the traces of limestone quarrying in Borghamn or on a village walk from Västerlösa to Hovanäset. Welcome to Kulturguidningar i Dal. See you in Borghamn! 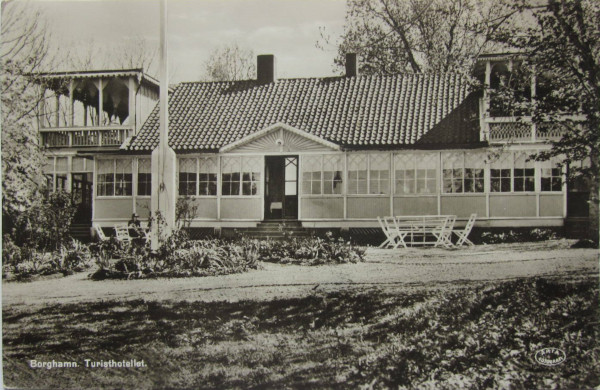 The narrow-gauge railway between Vadstena and Ödeshög was opened in 1888. This marked the beginning of tourism on the Omberg: Omberg's Turisthotell in Alvastra was inaugurated in 1892, Gyllenhammar's boarding house in Borghamn in 1914 and the youth hostel in Stocklycke in 1934.

Thanks to the railway connection, it had become easy for the inhabitants of nearby cities to get to the Omberg.

Borghamns Turisthotell, also called "Ombergspensionat", was established in the former officers' mess of the Kronoarbetskår, a military disciplinary corps, a little bit above the harbour facilities, i.e. today's Borghamn Strand. This was the original location of the Göta Kanal company's engineers accomodation. The military built a larger house with a glazed veranda and a view across Lake Vättern.

After the military had left Borghamn in 1894, the trade fair was turned into an inn and then into a tourist hotel. Guest rooms were located on the upper floor of the large outbuilding in the harbour. It is unknown when the two-storey side verandas were added.

The hotel was closed in 1957. One year later the railway to Hästholmen and Ödeshög was closed. The century of automobile tourism began. The rector of the rural household school lived here for several years. After that there was a scout home here. At times the rooms were also used by the youth hostel. At last "Liden", as the building was called, stood empty. In 2017 the plots of the former Turisthotell and the harbour with its buildings were separated from Omberg's Ecopark. "Liden" was sold by Sveaskog in 2017 and is now a summer house which is being renovated by the new owner.

Join us on a guided tour through Borghamn Strand, Bockakyrkågården and the old quarry.

View over Borghamn on Lake Vättern, 1909

A greeting from Borghamn. The postcard shows "Borghamn" and was taken about 1909.

A view of the harbour with its buildings with the headland Hovanäset in the background. One sailboat is at the small pier, another has moored at the "bondbryggan" ("Farmers Bridge").

The map is archived in Swedish Railway Museum. The connection to the railway is - as in the last greeting and hardly visible - the industrial narrow gauge railway of the quarry, which led past the small house in the middle of the picture on the right.

The picture shows the old and new access road to the harbour as well as the bakery. The bakery still exists today. However, the house is in an unrepairable condition.

The postcard is related to the railway. It is archived in the digital collection of Sweden's Railway Museum (Sveriges Järnvägsmuseets samlingsportal) (Jvm.KCAC12384).

Discover the history of the port and quarry and visit the guided tours "Sten födde Borghamn" ("Stone bore Borghamn", "Kulturguidningar i Dals" guided tours in the Borghamn of the Göta Kanalbolaget and the Crown Labour Corps. Guided tours every two weeks from July to September.

The disciplinar work corps of the Crown (kronoarbetskåren) with soldiers and prisoners had left Borghamn in 1894, and the former officers' mess was started to be used as an inn around 1900. The "Touristhotel" quickly developed and became part of the development of tourism on the Omberg after the construction of the railway between Vadstena and Ödeshög in 1888: Omberg's Turisthotell in Alvastra opened its doors in 1892, then Borghamns Turisthotell, Gyllenhammars Pensionat in 1914 and finally Stocklyckes Vandrarhem.

The photo of the "Turisten" was taken before the large verandas were built, which we know from other pictures.

Lilla Fridhem (built 1875) can be seen at the left edge. The house belongs to the development on the old village road (Svängavägen) from Västerlösa Gård to Omberg (Borg). Only Hagalund (also called Kransen) and the barn near Svängen are left of this development. And an older building on Brottsledet. The remaining properties were redeemed by the quarry as it expanded south towards Skedet.

The picture was probably taken from a place at the old harbour entrance. In the foreground you can see the quarry's light railway, which came from the inner harbour and the two nearest piers and branched into the quarry at a switch on two tracks.

The postcard has a connection to the railway. It is archived in the digital collection of Sweden's Railway Museum (Sveriges Järnvägsmuseets samlingsportal) (Jvm.KCAC12383).

Discover the history of the port and quarry and visit the guided tours "Sten födde Borghamn" ("Stone bore Borghamn", "Kulturguidningar i Dals" guided tours in the Borghamn of the Göta Kanalbolaget and the Crown Labour Corps. Guided tours every two weeks from July to September.