Borghamn is the largest village in Vadstena's southern community. The latter is often referred to as Dal or Östgöta Dal. Dals härad (Hundred), was a legal entity, which in the Middle Ages was formed by the small rural communities of Väversunda, Rogslösa, Källstad, Herrestad, Örberga, Nässja and, for a time, St. Peter's (St. Per) and Strå. For many years Västerlösa Gård was the residence of the Hundred's governor at the entrance to Borghamn.

Östgöta Dal's rural community was established in this area during the 1952 reform and only fifteen years later, Östgöta Dal was merged into the town of Vadstena. But the terms Dal and Östgöta Dal have survived to this day.

Dal is not only Sweden's granary with the best soils in Sweden, but also part of the cradle of Sweden. After the Viking era, the Swedish state developed here in Götaland. Dal is home to Sweden's oldest stone churches from the beginning of the 12th century: Herrestad and Örberga.

But unlike other places in the area, Borghamn is not agricultural shaped or developed around a manor and a manor church, but originated from industrial activities, the oldest of which has been practiced here for 900 years: the quarrying of limestone.

Some things have passed, like fishing. Older visitors remember the whitefish festivals that were once celebrated on the Hovanäsudde. But new businesses have also sprung up, and Borghamn has renewed itself in this way and has evolved over time.

Borghamn is a place without a church, but has a cemetery. There is no gravestone in the cemetery, but there are two gravestones in the vicinity, which were erected for two dogs.

If you look at the directory or on the map, there is a lot to discover in Borghamn and the surrounding area: the Omberg Mountain have not yet been named as an Ecopark with its diverse flora and the lake Tåkern with its rich bird life. Omberg and Tåkern are dedicated to separate pages.

Several roads lead to Borghamn. The Borghamnsvägen from the former highway 50 (today state road 919) to the harbour is the most important and heavily frequented.


From Skedet to Västerlösa is the Skedagatan, which was populated during the period of strong population growth in the 19th century. However, most summer visitors come to Borghamn via the Omberg and Sjövägen (Lake Road), a one-way road that starts in Stocklycke and runs along Lake Vättern to Borghamn with magnificent views.

And the first thing the traveller sees when he descends from Drottnings Ommas Castle into the plains is a harbour and quarry. This is where the history of Borghamn began over 900 years ago.

Sights and points of interest 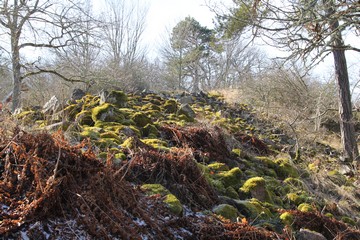 1. Drottning Ommas Borg
Northernmost of three hill forts from the migration period (450-550) on the Omberg. There are many legends surrounding Queen Omma. The Swedish poet Verner von Heidenstam (1859-1940) wrote the poems "Bygdeborgen" and "Skogen susar" about Queen Omma.

From Omberg's treasure trove of legends:

Drottning Omma is said to have lived in the northernmost castle, just above Borghamn. A girl from the village was abducted into the castle to be raised to the new queen after the old one. Drottning Omma always wore a mask. Granmar, who had lost his fiancée to Omma, visited her and killed her just to find out that it was his fiancée he had killed. The exchange had already been completed.

2. Sjövägen (Lake Road)
The Lake Road starts in Stocklycke on the Omberg and runs as a one-way street along the steep coast to Lake Vättern as far as Borghamn. Landscape and views are magnificent.

3. Vallgatan
The Vallgatan runs east of Sjövägen from Drottning Ommas Borg to Höje. It is closed to general traffic.

4. Brottsledet
In the first half of the 17th century, the Omberg became a royal state enclosure and deer park and was surrounded by a fence about four metres high, which the local farmers had to maintain. Names like östra and västra djurledet as well as Brottsledet are remnants of the time: gates in the fence.

5. Svängavägen
The Svängavägen was the old ascent from Borghamn to Omberg and Vallgatan. In 1972 the Sjövägen was directly connected to Borghamnsvägen through the quarry. Due to the southern extension of limestone quarrying, the Svängavägen was interrupted in two places. The expansion of the limestone mining also affected a part of the settlements at Svängavägen.

6. Bockakyrkogården
The cemetary was built in 1860 by the Kronoarbetskorps and was used until 1894. There are 80 soldiers buried there, as well as three children who died of cholera. 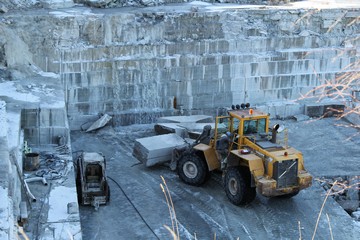 7. Omberg's (Västerlösa) limestone quarry
Limestone has been used in Sweden since the beginning of the 12th century. Here in Borghamn, the Cistercian monks began to break limestone for their monastery in Alvastra, which was consecrated in 1143. Since then, the quarry has been used continuously to this day. Other important buildings using limestone from Borghamn were the monastery church in Vadstena, the Götakanal, Karlsborg Fortress and the National Museum.

8. Borghamn Strand
Borghamn Strand opens spring 2019 in the former premises of the youth hostel and former rural household school. The complex was a penal colony at the time when the quarry and port were owned by the Kronoarbetskorps, a military disciplinary corps. 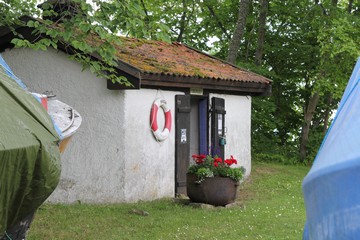 9. Fishing Museum
The Fishing Museum is housed in the former laundry building of the Kronoarbetskorps and displays equipment and fishing methods from Borghamns history. 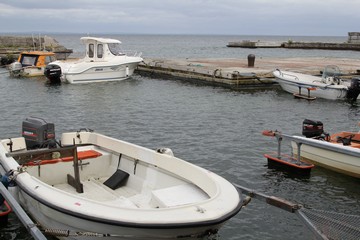 10. Harbour
The port of Borghamn was built from 1810 and was enlarged again in 1825 to facilitate the despatch of limestone to the construction sites at Göta Canal and Karlsborg. Before that, there were only simple jetties closer to the Omberg. The port is classified as an emergency port and therefore cannot be used as a guest harbour.

11. Borghamnsten AB
Borghamnsten AB is the successor of all companies and the Swedish state that have quarried limestone here at Omberg. Limestone and marble are processed. The company produces worktops, window sills, floors and claddings. One reference is the NK (Nordiska Kompaniet) department store in Stockholm. 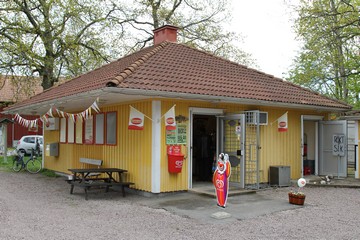 12. Borghamn's Kiosk and Fish
Today's land trade was inaugurated in 1998, but has a tradition that goes back to 1938, when a kiosk opened here. It was a central meeting point for the local population and the first stop for many visitors who came to Borghamn from Omberg. Speciality of the house are fresh and smoked vätternfish caught by Borghamns last fisherman. 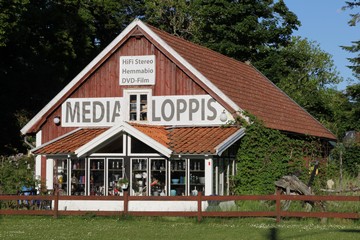 14. Västerlösa Gård
Västerlösa gård was for many years the residence of the Dals härad's (Dals Hundred's) governor. 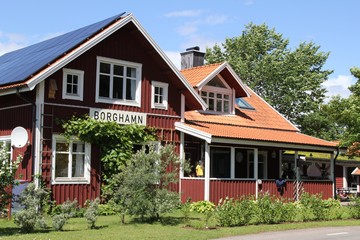 15. Former station building
The railway between Vadstena and Ödeshög was opened in 1888. The train station was centrally located between the districts of Västerlösa and Bårstad. The connection was closed in 1958. 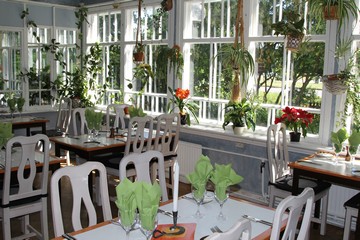 16. Gyllenhammars Pensionat
The railway connection between Linköping and Vadstena led to the development of tourism in the Omberg area. Gyllenhammar's pension opened in 1914 next to the station building. Today, Gyllenhammars is a highly esteemed restaurant, which offers jazz evenings and other experiences. Open from Easter to October.

17. Bygdegården / Loge
Loge Omberg was founded in 1896 and shortly afterwards received its own meeting house, which was expanded in 1906 with a larger theatre hall and a small rural trade. In 1971 the premises were rather dilapidated and were sold to the municipality of Vadstena. After an extensive renovation, a newly formed village community house association took over the maintenance and operates the house on its own.

18. Bårstad's former limequarry
In the now water-filled quarry (1860-1960) limestone was broken for the lime kiln on Hovanäset and Bårstad's lime kiln (from 1908 onwards).

19. Bårstad's former limekiln
Lime was burned for agriculture and bricklaying on the open area opposite the water-filled quarry. The furnace was dismantled in 1972. 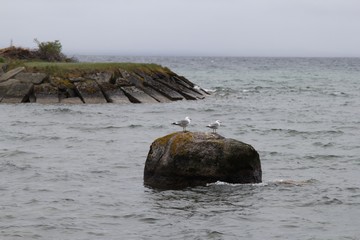 In the fishermen's village

20. Fishermen's village
From the beginning of the 19th century to around 1960, fishing was an important industry in the village. The oldest fishing population lived on Hovanäset. The first port was built about 200 years ago. At the end of the Second World War there were 18 professional fishermen with their families who fished char, burbot, whitefish and vendace.

21. Borghamns Stenförädling
Borghamns Stenförädling AB was founded in 1951 and mainly produces and refines material from its own quarries. Borghamn produces light grey and greyish-brown Borghamn limestone, while Kolmårdsmarble is extracted from Oxåker. This results in floors, stairs, window sills, worktops, wall coverings, garden stones and much more. The company is also involved in the recent renovation of the National Museum in Stockholm.

22. Hovanäset
Hovanäset was a part of the village of Bårstad with Torp. From 1860, one of the landowners of Bårstad started a distillery, mill and lime kiln as well as a dairy at the barn on Trädgårdsudde and his own boat harbour. Remains of these activities can still be seen today on the tongue of land. They were discontinued at the beginning of the 20th century. A new lime kiln was built opposite Bårstads limestone quarry.

23. Hembygdsgården / Local History Museum
The local homeland association uses the old buildings on Hovanäset. The local history museum shows the stone industry in Borghamn, a complete shoemaker's workshop, utensils, a flat from the twenties and fifties, handicrafts from wire by the migrant worker "Öland".

There is no scheduled service to Borghamn. But at Östgötatrafiken you can book journeys between Vadstena and northern Omberg. Read more on Östgötatrafiken - Närtrafik (In swedish only, use translation function for information in English).

25. Former village Bårstad
Bårstad was first mentioned in documents at the beginning of the 13th century. The old village consisted of six farms before the land reform of 1827 (laga skiftet) was carried out. Two farms remained, while the four others settled outside, nearer to the bathing area or in the direction of Borghamnsvägen. 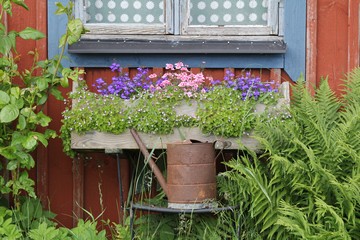 26. Skedagatan
Skedagatan is located on the border between Rogslösa and Väversunda. At the outskirts or border between two municipalities, people settled from the middle of the 19th century at the time of the great population growth, as long as they did not emigrate or move to the larger cities.

27. Rogslösa Church
The church was built at the beginning of the 13th century as a private church of the only manor in Rogslösa and replaced a former wooden church. It is mainly known for its entrance portal with the so-called Rogslösa door.

Amongst others, Lydia Wahlström (1869-1954), an active member of the Swedish voting rights and women's movement, the majority of the "incomparable" sisters from Häckenäs and Jonas Andersson, a member of the parliament from Häckenäs, co-founder of Östgöta Dals and Östergötland's Volkshochschule, are buried in the cemetery.

With the construction of the railway Vadstena-Ödeshög a settlement developed around the railway station. Rogslösa was the seat of the former Östgöta Dals rural community.

28. Väversunda Church
A romanesque and best-preserved medieval church from about 1160, built of Ombergs limestone. The predecessor was probably a stave church. 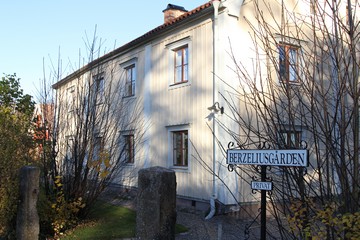 29. Berzeliusgården
Birthplace of Jöns Jacob Berzelius (1779-1848), chemist and natural scientist, discoverer of the chemical elements cerium, selenium, silicon and torium. In the armoury of the church next door there is also a small exhibition about him, which is open daily in the summer from 9am to 6pm.

View from Bårstad's lime kiln before 1960

The picture postcard shows the view from Bårstad's lime kiln and was taken before 1960.

The lime kiln at Bårstad's limestone quarry was put into operation in 1908, after the predecessor on Hovanäset had been shut down. It was in operation until 1960 and was blown up around 1970. A small hill by the tennis court opposite the water-filled quarry is a reminder of it.

The picture shows Hovanäsvägen in the foreground, i.e. the way from the railway station in Borghamn to Hovanäsudden, and the "fishing village" behind towards the shore of Lake Vättern.

The settlement here in the Bårstad's part of Borghamn developed from the beginning of the 19th century and had the fishing as economic background. In 1940 there were 28 families who earned their living from fishing. The inhabitants of the lakeside estates had their own small harbours and bridges, which still exist.

Take a guided tour from Västerlösa to Hovanäset and discover the unknown eastern part of Borghamn. Read more on Kulturguidningar i Dals guided tour programme.